Executive Chef, Niall Keating has gained two Michelin stars, a plethora of outstanding industry awards and a profile as one of the leading chefs in the UK today; all since joining Whatley Manor in late 2016.

Niall’s cooking is inspired by Asian elements, especially Korean and Japanese, a commitment to sustainability means that whilst his dishes are influenced by international flavours his ingredients are sourced as locally as possible. 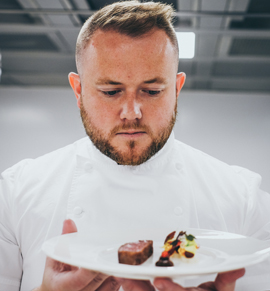 Born in Staffordshire, Niall Keating had his first taste of a busy restaurant at age 15, when he worked as a pot-washer at The Fitzherbert Arms, Swynnerton. From then, Niall’s hospitality career began. His first proper kitchen role was in 2010 as Commis Chef at Michelin-starred Bath Priory Hotel – and in just two years he worked his way up that culinary ladder to Sous Chef.

He then moved to Copenhagen in March 2016 as Chef de Cuisine at Michelin-starred Kong Hans Kælder. Then, in December 2016, Niall accepted the role of Executive Chef at Whatley Manor in Wiltshire. He is responsible for The Dining Room, as well as the more informal Grey’s Brasserie, and The Green Room, a mixed-use space for private events, and cookery and drinks showcases.

Since joining Whatley Manor, Niall has achieved numerous accolades for The Dining Room – including two Michelin stars in the Michelin UK & Ireland Guide 2020, having received a first star in 2017, and four Rosettes in The AA Restaurant Guide 2020. The Dining Room also achieved a 7/10 rating in the Waitrose Good Food Guide 2020, placing the restaurant in the guide’s Top 50 list, as well as featuring on the National Restaurant Awards list of the top 100 restaurant’s 2019.

In 2018 Niall was awarded Michelin Young European Chef of the Year at a ceremony in Budapest.

In November 2019, Relais & Châteaux awarded Niall the Rising Chef Trophy. He was also named Michelin’s ‘Young European Chef 2018’, and was included in CODE Quarterly’s annual 30 Under 30 list of young industry professionals in 2018 and 2019.

Niall took part in the 15th series of the BBC’s Great British Menu in spring 2020, where he represented the Central region of the UK, and won that heat. He went on to compete in the Final, where his fish course “The Witches of the Northern Lights”, inspired by the novels of Phillip Pullman, won him a place at the banquet in celebration of children’s literature. Niall was also named the series’ ‘Champion of Champions’, and was also included in the chef line-up for the Great British Menu Christmas series in December 2020.

Following the temporary closure of Whatley Manor over the first lockdown, and reinstated for November, Niall operated the Paradise Carriage on the hotel’s grounds in May 2020. The modern food truck operated as a drive-through, serving take-away dishes inspired by Whatley Manor’s more casual restaurant Grey’s Brasserie. Over the summer, Niall welcomed some guest chefs for one-day pop-ups, including Tom Brown, Gareth Ward, and Sat Bains.

We have long established relationships with local farms and fishermen and our local suppliers from Devon and the West Country provide our chefs with the pick of fresh local produce. This cuts down on food miles and means that all our cuisine is bursting with flavour and goodness.

To book a table at one of our restaurants